Highlights of Bangkok’s Wat Pho and the Reclining Buddha 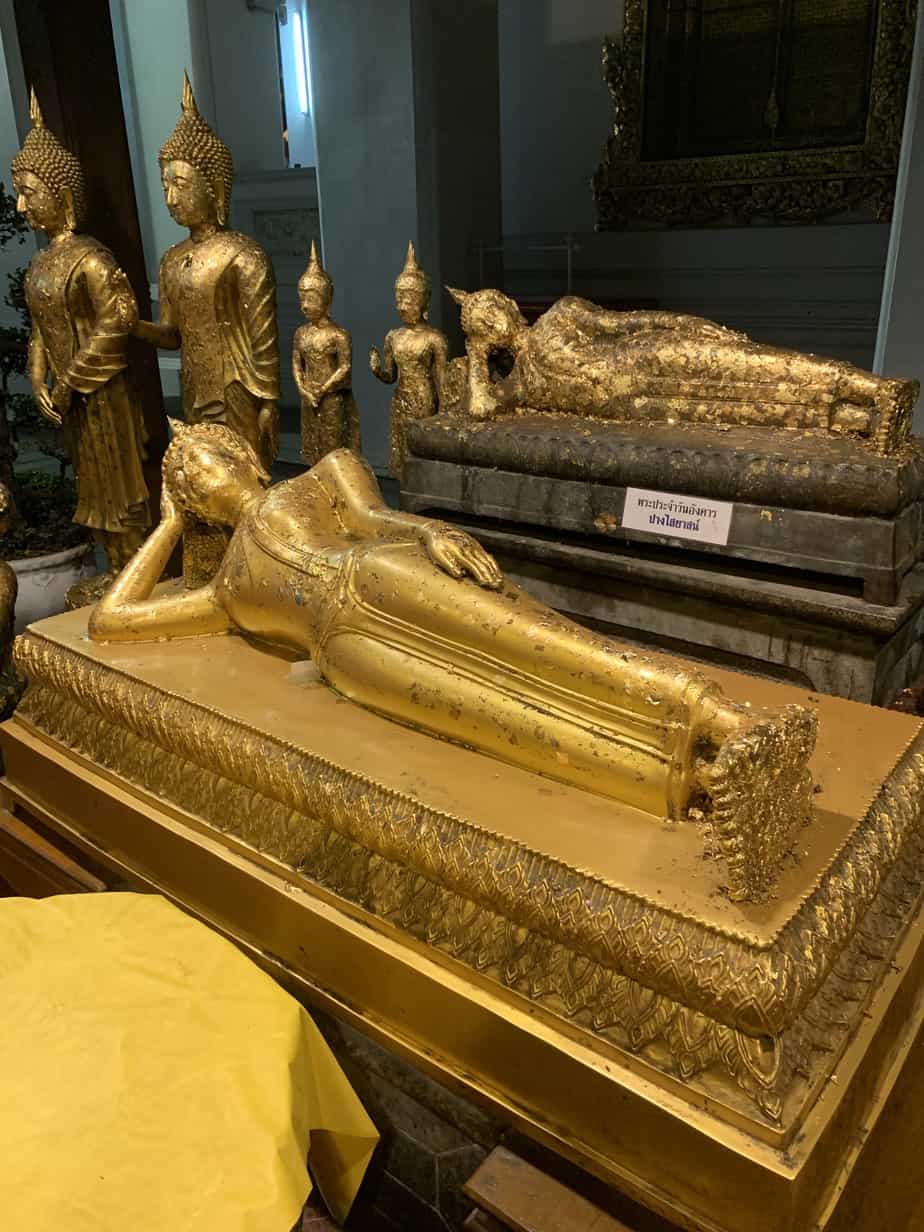 We’ve spent a couple days touring Wats now. It’s definitely sensory overload. So beautiful and intricately detailed. It’s a little overwhelming, not to mention so stinking hot. We keep saying we’re getting up early. Then we don’t. It’s freakin hot. Don’t be like us. Get up early. It won’t matter, it’ll still be hot but maybe it won’t be as crowded.

One favorite scam of local tuk-tuk drivers is to tell you the temple is closed but they’ll take you to a better place. Don’t fall for it, the temples rarely close. Just keep walking towards the main entrance and only pay at the main gate.

When visiting any temple, it’s important to to dress properly. Cover your shoulders and wear long pants or a longer skirt. No midriffs showing either. There are rental clothes at the temples but you’re better off buying 100 baht elephant pants, if needed, instead of renting clothes that loads of people have sweat in.

We first saw Wat Pho at night on the Tuk-tuk tour. It was equally stunning then, entry was free and there were very small crowds. We’ve since gone back another evening. It’s just that peaceful.

You can’t see the Reclining Buddha at night, and it is quite arguably one of the coolest things I’ve ever seen. So certainly worth a trip during the day. As you enter the temple grounds, you get a glimpse of the Buddha through the windows. We decided to save him for last.

Instead, we first made our way to the Watpo Thai Traditional Medical School for a massage. The school teaches the art of Thai massage and herbal remedies. It was a little expensive at 320 baht for a half hour and 500 for a full hour. We’d read that you can put your name on the list and then go exploring till it was your turn. It wasn’t super busy though so they took us straight in. We opted for the half hour and it was plenty long enough. You remain fully clothed in a room with lots of other tourists and experience pressure point massage. It was a little painful (in a not horrible way) and I’m not sure I could have tolerated a full hour. We forgot to discuss it ahead of time, but I tipped 100 baht, whereas Steve only tipped 20. Neither of us were certain of the proper amount. Later, I found a great blog post on tipping in Thailand, which you can read here.

After the massage, we wandered the temple and realized there actually was quite a lot that we hadn’t seen on our night visit.

There are four chapels (wihaan) with sitting Buddhas in them, which were stunning in their own rights.

The bot houses Phra Buddha Deva Patimakorn and the ashes of King Rama I.

In the galleries between the four chapels are 394 gilded Buddha images.

King Rama III wanted Wat Pho to be a learning center. Throughout the grounds are stone inscriptions, statues and paintings showing yoga and massage techniques and poses.

There are four large tiled stupkas in a courtyard, built for each of the first four kings.

We explored the temple for a couple hours and then got in the crowded queue for the reclining Buddha. There were large bins of plastic bags for carrying your shoes and hats while inside the the temple. They get reused over and over again.

I don’t mind telling you I felt excited like a kid in Disneyland. The Buddha was huge! 46 meters (150 feet) long and 15 meters (49 feet) high! It reclines to represent the dying Buddha in the position he adopted to attain nirvana. The figure is made out of brick and plaster and covered in gold leaf.

His feet are covered in mother-of-pearl images representing the 108 lakshanas, or signs, of Buddha.

Even with the hordes of tourists, people were generally polite in letting everyone get their pictures.

One thing I enjoyed was hearing the continuous clank of coins into 108 bronze monk bowls along the back of the Buddha.

You buy 108 coins for 20 baht and drop one in each bowl for good luck and as a gesture of giving alms.

Wat Pho is a beautiful temple and an excellent example of a university when many of the citizens could not yet read and write. It is certainly worth a few hours of your time in Bangkok. I know I’ve not even begun to cover everything there is to see.