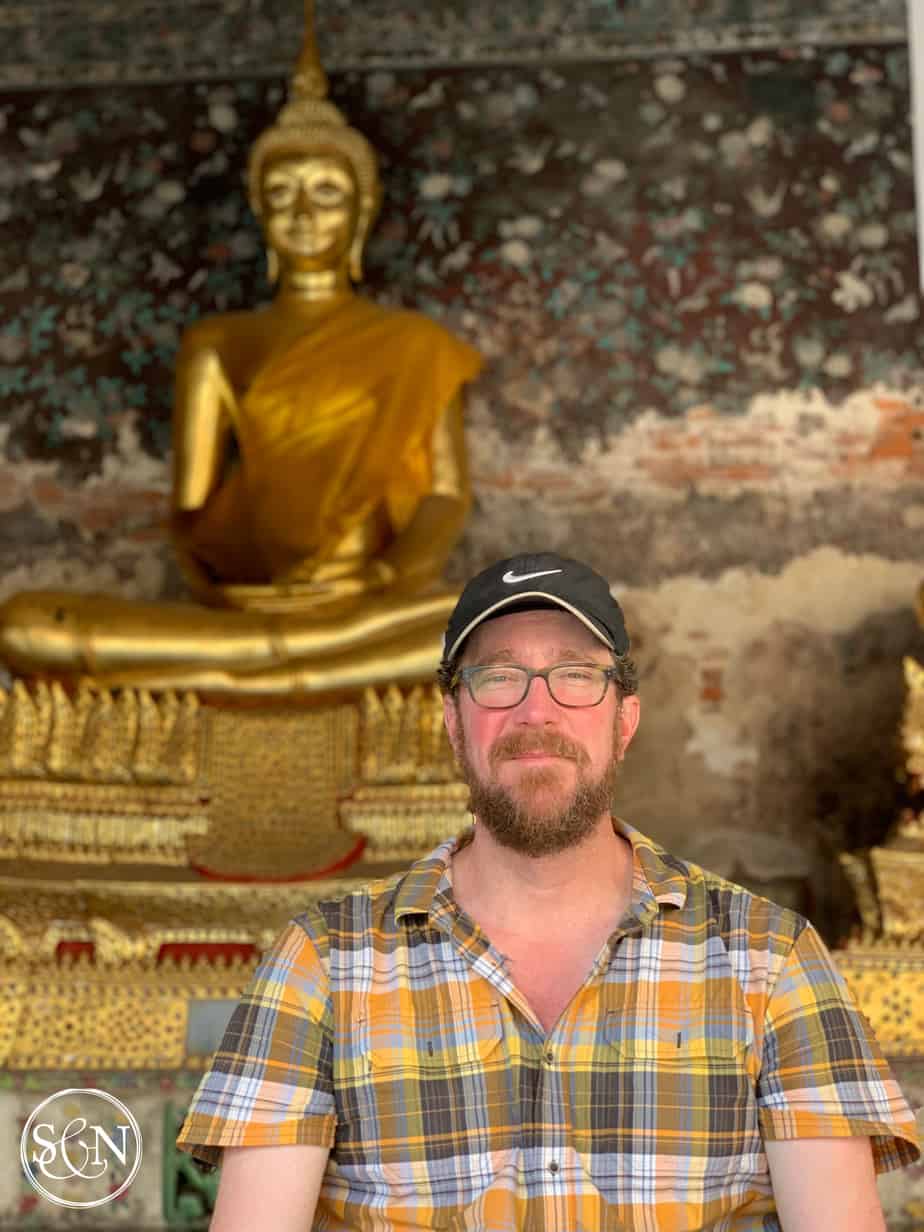 Wat Suthat proved to be one of the best temples we’ve explored yet! It’s grounds are amazing and the sense of peace in the air is palpable. This is one of Bangkok’s jewels!

Noelle here: After walking a couple blocks from our hotel, we take the underground to a new area where I’d found a nail salon on google. Off we went for our first time taking the MRT, which turned out super easy and seemed very shiny and new. I’m not sure how new it actually is but every foot we descended below ground seemed like a ten degree temperature drop. So it probably actually looked wretched down there and merely seemed like an oasis without the heat.

After a short ride and a quick walk, we found a small opening to an alley, at the back of which stood a hair salon, with one chair for pedicures that I happily took.

Why don’t cats care about humans???

Got to sit next to this little cat who couldn’t be less impressed that someone had sat down beside him.

While getting new polish, I checked for cool things around us and saw the Giant Swing within a couple blocks. We’d seen it on our evening tuk-tuk tour and decided to see it up close. It became our next stop.

On the way, we decided to check out a temple, so we ducked in the side door of the courtyard. Have we mentioned that most of the temples are in walled enclosures? Maybe all of them are? I’ll have to pay more attention.

Check out another cool temple by clicking here!

Groups of women fed people in the courtyard. We thought perhaps they were feeding the homeless and indeed some of the people probably were. Others, however, may well have been going to a party, in their Sunday best. When they offered us food, I just wai-ed and said thank you but kept pressing through the crowd. It struck me as odd that the lady didn’t like it that I said no. There were no other foreigners and it just felt wrong to take the food.

We made our way towards the front and paid the tourist entry fee. Turns out we wandered into a pretty cool place.

Wat Suthat is a royal temple and one of the oldest and most important temples in Bangkok. It’s also one of the largest, covering ten acres. The brochure we received says it’s “1 of 6 of the temple first grade in Thailand”.

Construction on the temple began by King Rama I in 1807 and completed during the reign of King Rama III in 1848. It’s location in the center of Bangkok makes it the most majestic temple of the Rattanakosin period. A neat thing about this temple is that the architecture was a “Cosmic Layout” and it was the first Thai architectural form in history. Wat Suthat exists as a symbolic representation of Mount Sumeru, a sacred mountain existing in the center of the universe. It is believed that the Hindu god Indra dwelt in the Mount.

This temple holds the bronze Buddha image Phra Sri Sakyamuni, which came from the Sukohthai Province by riverboat about 800 years ago. It’s about 25 feet tall. When the image first arrived in Bangkok, festivities surrounding it lasted a week, including parades around town. Today, enshrined beneath the large Buddha image, lie the cremated remains of King Rama VIII.

Murals in the Viharn (assembly hall)

Murals cover the walls in the viharn surrounding the Buddha showing scenes of daily life in the Rattanakosin era. Some of the murals tell stories of Buddha’s previous lives. These murals, along with those at the Grand Palace are some of the best in Thailand.

I’m not sure of the story behind the smaller Buddhas above or of the bronze mural above them, but they were certainly beautiful.

We didn’t go into the bot (main prayer hall where monks get ordained) because a prayer time was in session. It seemed like the concregation were all sitting on the “porch” and only the monks were inside. We stood outside to listen for a while. Honestly, we also felt a little nervous about losing our shoes, after reading the many warning signs

As we explored the outer buildings and the many Buddha images, we noticed people walking laps around the viharn, chanting or praying as they went. Some were walking alone or with a friend and one was even walking with a dog. I don’t know how many loops they made.

We noticed a group, led by a monk, begin the walk. It took a few laps before we realized that some of the people were the same ones handing out food in the courtyard and that they were processing formally. We think it was a funeral and giving food was a way of making merit for the dead person, which explained why the lady didn’t like me not taking the food. I hope my actions caused no offense, a foreigner unfamiliar with the tradition, but meaning no disrespect.

It was interesting to watch the group and I couldn’t help but think of my dad. Cultural differences in mourning and in burial practices intrigue me. Intrigued since I was a little kid going to my great-uncle’s funeral. I don’t remember a lot about it beyond the dark, crushed red velvet everything, walls, curtains, furniture! It’s all red velvet in my memory.

As we sat there, I cried a tear or two, missing Dad, wishing I were part of a procession for him, praying as we made our own loops. I decided to send my thoughts of Dad to that little dog in the pink dress, who was indeed looping with her human. In my heart, I think Dad would appreciate a dog making intercession on his behalf, since he loved dogs, and that one looked similar to my sister’s little Abbey, who was the love of Dad’s life in recent years. So I sent that little dog, in her pretty pink dress, happy thoughts of Dad and I believe she carried his spirit for a few laps. “It is believed”, as one of our tour guides was fond of saying.

After the procession, we wandered a bit more, enjoying the beauty and the peacefulness of this place. It was certainly one of the largest temple grounds we’ve gone to. We saw this little bronze horse, with marigolds around his neck. Another horse had no flowers, so we’re not sure if this one was more special or if someone only bought one strand of flowers. There also were ebony Buddhas, mixed in with the golden ones. It may be my first time to see them in black and we weren’t sure why. Much of the temple is undergoing a renovation, so perhaps it had something to do with that?

Back on the side of the courtyard where we had entered, we saw what we believe to be a cemetery. There were plaques telling of the Buddha’s visit to this site over the course of a week and what he did on each day. So much history surrounded us.

The large gathering of people remained in the courtyard so we steered clear, especially after realizing it was actually a funeral. We enjoyed wandering to read the plaque inscriptions from Buddha’s visit.

It also turns out that The Giant Swing is part of the temple. The name of this huge red swing is Sao Ching Chaa. It’s made of teak and is about 65 feet high. King Rama I had it built during his reign. Lightning struck & damaged the swing, which resulted in a renovation, followed by a move to where it sits today in front of Wat Suthat. Young men would compete in Brahmin ceremonies by trying to swing high enough to grab a bag of gold coins attached to a pole. Then they had to grab the bag with their teeth! Yep, nothing unsafe about that! The competitions ended in 1925 after several fatal accidents. Hmmm, imagine that!

Wandering with Dad in my heart

As we made our way back to the underground train, my thoughts stayed with my Dad and with the family laying to rest one of their own. I even thought of him as we passed a cool old Vespa. It reminded me of a camper outside Dad’s assisted living apartment. It was on a neighboring property and Dad would tell me that he’d love to fix it up and then come traveling with Steve and I. He liked fixing things up. He restored a Ford Bronco when I was a teenager, so I think he would have enjoyed restoring the old Vespa. I liked that in today’s travels I got to think about Dad and restorations and renovations and earning merit for our dead.