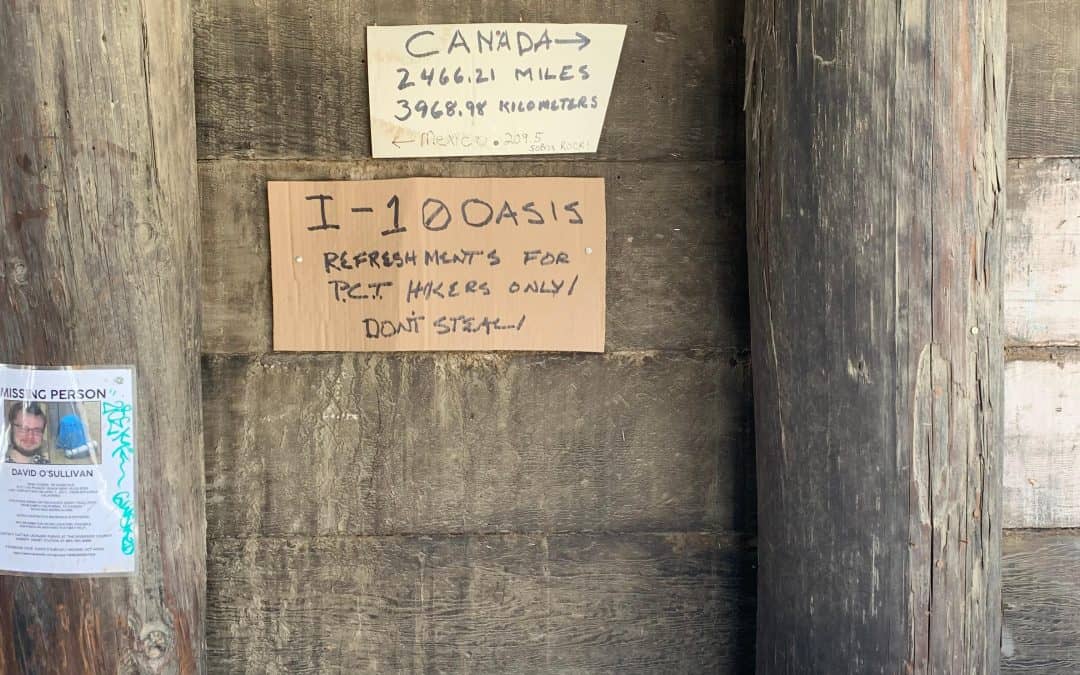 Here’s our tent site with our sleeping bags drying out on top of the tent. In an effort to keep my feet warm last night, I had put my large trash compactor plastic bag inside my sleeping bag, outside my liner. The goal was to eliminate the draft at my feet from outside the tent. At 6’3″ my head almost touches one wall and my feet the other wall. It’s drafty. In any case, my idea failed and my sleeping bag was damp from my bright idea, so I needed to dry it out.

We spent the night at the campsite to the right of the water symbol. Below is a screenshot from the Guthook app we use on our phones. When we activate the GPS option there’s a little symbol that will show our current position. It’s quite handy! There were four or five other tents and or campers in our location.

Guthooks lets us preview the route, so we knew we were heading downhill the next day.

Feeling quite proud to be running early we exited our tent at 7AM, just in time to see the last hikers leaving the tent site! We were the slow pokes after all.

We realized quickly during the morning hike that our decent was one hundred percent exposed to direct sunshine. It was so very warm. We “camel”-ed up at a water source and continued our descent to the valley floor.

Noelle really wilted in the heat today. The first part of the mornings hike was direct sunlight and no shade as we descended the mountain.

Strangely enough, though, there was a water fountain at the base of the mountain.

We hid in the shade of a big rock and rehydrated and called one of our daughters to wish her a happy birthday. It was great and unexpected to have cell phone reception!

After leaving the water oasis we hiked four miles through a blazing hot, flat, windless, sandy section. Noelle melted. After a very rough couple of hours we made it to the I-10 freeway underpass.

Other hikers were also suffering from the heat and were splayed out in the shade like melted Crayons. One kind German hiker eyeballed Noelle, and after asking permission, dumped her water over Noelle’s head. It did a great job of reviving Noelle.

It’s crazy difficult to hike from freezing conditions to heat stroke conditions within a 24 hour window.