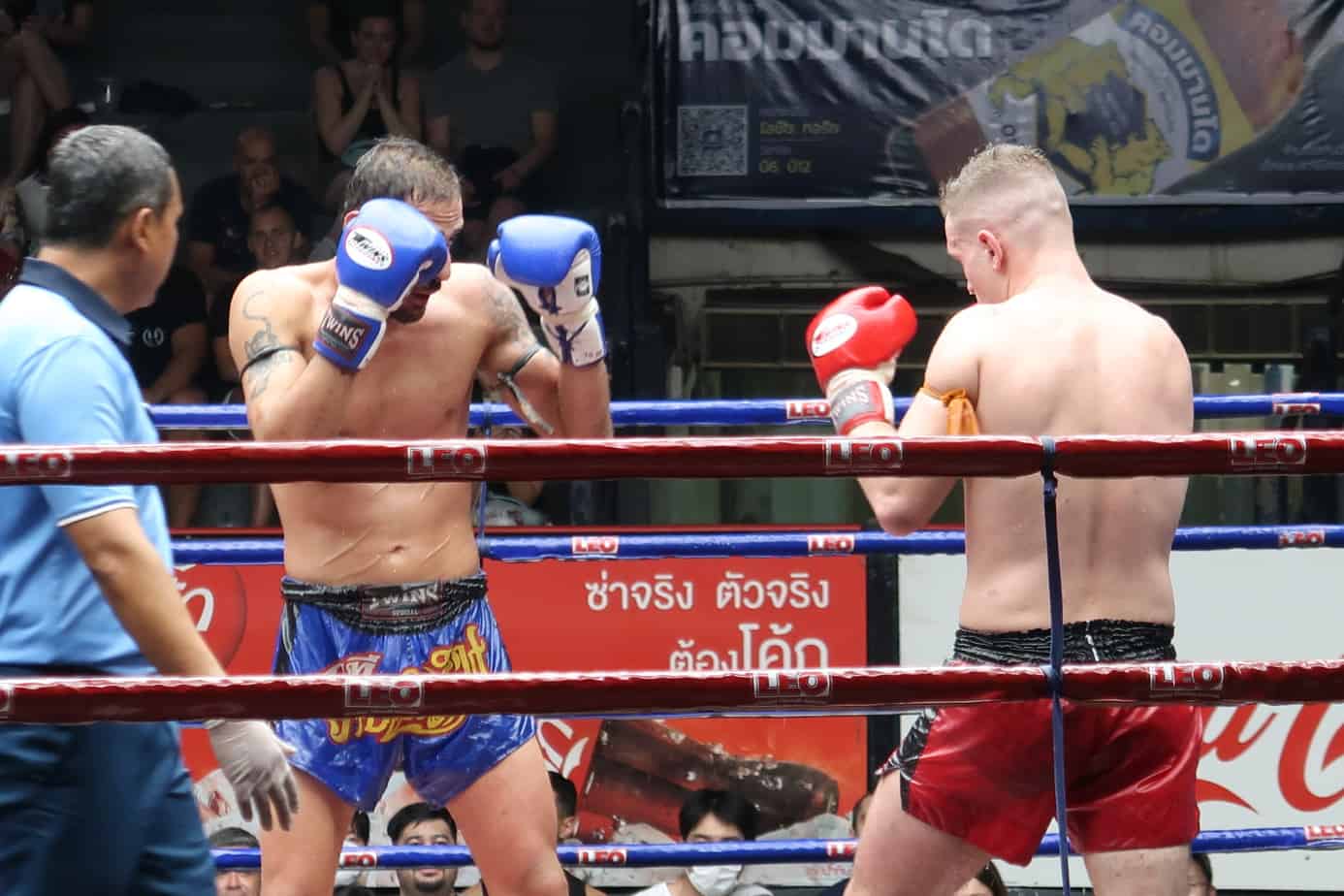 So I must admit upfront that I’m a bit of a casual Mixed Martial Art (MMA) fan. Casual in that I watch the replays on YouTube after big fights. I’ve watched Muay Thai Boxing a few times here and there over the years. I’ve fruitlessly scanned the TV channels in our hotels since we’ve arrived in Bangkok looking for Muay Thai. Since Muay Thai is Thailand’s national sport, I decided to drop a few coins and go to a live show. I’ve never attended a live MMA or boxing event so I had no idea what to expect.

After reading far too many TripAdvisor reviews I decided that we’d go to the Rajadamnern Muaythai Stadium for the show. There are other shows in the area, but I opted to go for the biggest and hopefully best show. A different show seemed to be a mix of dance, history and Muay Thai . A different show (free!) was in shopping center. Alas, the free show didn’t fit our schedule since I hadn’t planned ahead. I wasn’t so interested in a mixture of dancing or Muay Thai. I was looking for straight up ass-kicking!

The initial challenge of attending the show at Rajadamnern Muaythai Stadium was was in transporting ourselves from “here” to “there”. Many of the online reviews lament the lack of public transportation to the Stadium. I’ll be the first to admit I’ve been both impressed and seriously annoyed with Bangkok’s rail system. Impressed that you can easily move from point “A” to point “B” fairly easily as a foreigner. It really is a breeze.

The transportation challenge comes floating into focus when I want to overlay the rail map(s) with a street map. I’m sure it’s out there somewhere, but I certainly haven’t located it yet. We’ve ended up opening multiple devices to look at different maps simultaneously, or tried to use a paper map and a hand held device. Anyway, I give the rail system a solid B+ and the lack of overlay maps a solid “F”.

So after a bit of arguing amongst ourselves, we decided to take a Taxi. I’m somewhat loathe to take a non-metered taxi anywhere. Yet, here, in the tourist section of Bangkok, it’s difficult to obtain a metered taxi. We’ve ended up bartering with a taxi driver and paid him 200฿ for a ten minute ride. In comparison, we paid 80฿ the other day for a metered twenty five minute ride. In either case, both are ridiculously cheap. Yet…It bothers me, the continual (in my opinion) being taken advantage of as a foreigner. We’ve been to several tourists sites that literally have different prices for locals versus tourists. Seriously!

So, with the the taxi ride out of the way we began to make our way into Rajadamnern Muaythai Stadium. We were met five feet outside of the taxi by a staff member who helped us pay for our tickets. We opted for the “Club Class” tickets, which landed us in the Foreigner section. The ticket prices, for Foreigners, ranged from 1000฿ to 2000฿. Ringside seats went for 2000฿, nosebleed section seats went for 500฿. We opted for the 1800฿ seats in the “club class” section. This gave us a nice seat slightly above the ring. There were two different seating types in our “height” section. The club class which gave us plastic bleacher seats with backs, or we could have sat at the same level, but on concrete for 1500฿. I’ve sat through shows before on concrete slabs and the 300฿ was a no-brainer. Best money spent of the evening.

The event kicked off at 6:25 as we all stood for the recognition of the King of Thailand. A video played on the big screen above the Club Class seating section. I’m not sure if the national anthem was played or not, but I’m thinking it wasn’t. It seemed like a montage to the King. I may have stopped paying attention.

With the King’s recognition completed the evenings fights got underway. We had already eaten dinner, so we started out with one beer and one tea. (I’ll let you guess who drank the tea!) The beer (Chang) was 150฿ and the tea was 40฿.

Each fighter entered the ring wearing a Mongkon. A Mongkon is a headpiece that symbolizes your family, gym and your trainers It’s a symbol showing that there is more to the fight that just “you” and this exact moment.

After the wai kru ram muay is completed the coach will remove the Mongkon, the woven head piece. The Mongkon is a reminder to the fighter that it’s not all about “them”, it’s a reminder that others helped them on their journey, their trainers and families.

As the fighters begin the fight, music begins to play. Seriously! There’s a four piece band sitting and playing music during each fight.

The music is kind of like a live soundtrack to the fight. The tempo increases as the action increases and ebbs when the action ebbs…but the music is also used to encourage the fighters to pick it up a bit and fight harder. So which came first? No idea.

Click here to listen. This is a clip from one of the fights that should give you an idea of what the music sounds like. The horned instrument is a Pi Chawa. It has a very distinct sound.

OK, so the fights themselves? Five rounds, three minutes per round, two minutes between rounds.

We sat through nine of ten fights. Seven of the nine fights resulted in knockouts. This was not a scripted show. The kicks sounded brutal and looked brutal. I often winced when the kick connected with the leg or side flank. I wanted to see an ass kicking right? Well, maybe not.

Some of the knockout shots were lightening fast. A few of the knockouts were from side flank kicks. The fighter just got hit so many times, that when that one final kick connected with his flank he collapsed on the ring floor.

In between rounds the trainer would jump in the ring and talk with the fighter.

The vacuum guy was also new to me. Do all fights have a vacuum guy and I’ve just never noticed due to how I’ve viewing the fight on TV? Once the fight resumed he would pull out the drip pan, dump the water and ice into a bucket and then vacuum the ring corner. This was happening while the fight was occurring! I believe most of what he was vacuuming up was ice. I found myself curious how they prevent the fighters from slipping on the ice if they work their way into a corner with ice still on the ring.

I enjoyed watching the excitement of the fighters families. The families were contained, if that’s the correct term, in a area near the fighters corner. They would shout, yes shout, in jubilation when their fighter made a impressive kick or punch.

Watching the families engage and cheer on their fighter was actually a great deal of fun. Each good connection of a kick was greet with a cheer. Ten successive kicks equaled ten successive shouts. When the opponents were each trading kicks back and forth, the families from each corner were trading shouts back and forth. The fighters families involvement increased our enjoyment exponentially.

The crowd of spectators was also involved in the fight. Here, between rounds, a spectator is shouting instructions down to a fighter. What caught me off guard with the shouting was that a few times it was interactive! The fighter acknowledged the feedback with a nod of the head or slight arm wave. What the heck!!! In my mind, the trainer would seriously knock the fighter upside the head for not paying attention to his own corner…

Both prior to and during the fight the bookies worked the crowd to place their bets. We could see two of them at work during the course of the evening. We had chosen to sit in the “club class” seats in the tourist section. This gave us chairs compared to club class seating on concrete benches. My liver and kidneys requested a slightly softer seat, so we sat on the chairs. I say all that to say, if you’re really looking to mix it up with the locals, and perhaps place a wager or two yourself, sit with the locals.

When the end arrived for some fighters, it was abrupt. This fighters evening ended in a heartbeat when he was on the receiving end of a kick to the head. His family had been wildly cheering only moments ago and suddenly they were knocked silent themselves.

The fighter who was knocked out didn’t regain consciousness when he was picked up, placed on a stretcher and carried out of the ring.

We were lucky enough, if that’s the correct term, that a spectator in front of us captured the knock out shot on his camera. We all watched the clip several times and winced as he was clobbered with a foot to the side of his face. The strike was so hard that the sweat was literally knocked off his head. It was brutal in its execution and equally brutal in watching him be carried out of the ring.

What wasn’t brutal was the respect that the fighters gave to each other. I saw zero MMA/boxer style bravado. When a knockout occurred the fighter who delivered the knockout invariably checked on the well being of the downed fighter.

The majority of the fighters were Thai, but these two heavyweights weren’t. Both fighters weighted in around 160lb. The Thai and Laos fighters were between 90lb and 130lbs. The fighter in the blue trunks was from Iran and the fighter in the red trunk was from Belarus. I thought the Belarus fighter was different than any of the other fighters that we saw. He played to the crowd, waving his arms for more applause and shouting back and forth with fans in stands. I was slightly disappointed that he won. I’ll give him this though, he definitely got the crowd fired up.

We left during the last match and headed back to the hotel. We arrived around 6:15PM and left around 9:30PM.

The stadium is a little remote depending on your hotel/apartment/condo location in Bangkok. We’re trying to plan our activities around the locations where we’re residing to keep our transportation issues to a minimum. I want to say that we paid about 200฿ to go back to our hotel via a taxi. Yes, that’s an outrageous price for a ten minute drive in Bangkok. As with many of our trips to foreign countries, I accept that I’m going to be taken advantage of by taxi drivers. I’d rather just pay a few extra coins and not worry about it. So, logistically, it wasn’t difficult to go to the stadium.

As for the event itself? We enjoyed it far more than we expected to enjoy it! Even if “fighting” isn’t your thing, this is a great way to watch the Thai’s, both the fighters and the locals, engage in their countries national sport. It’s engaging, enlightening way to spend an evening.