Thanks for the trail name, Deb! I think this one is a keeper. I tried out “Little Engine” for a bit, but last night I introduced myself at camp as Lemonade and its a winner!

It fits for the reason you said, “life hands you lemons…”, but also because on a trip to Italy years ago, I fell in love with Limoncello. I mean serious love. Like I make my own now – it’s not as good as a bottle from Italy, but it’s definitely drinkable! 🍋 🍸 🍋

As I type, I’m sitting in the van on the side of the road. I just pull over wherever looks good and then I hang out for a while.

I’m meeting Steve in an hour or so at Hiker Town, so right now I’m just relaxing.

Yesterday I drove ahead of him and then hiked back to him to camp together. Full backpack for the first time! I felt pretty good for about the first half mile, then I realized I was on the Northbound part of the trail, so I had to turn around and go back! So embarrassing! 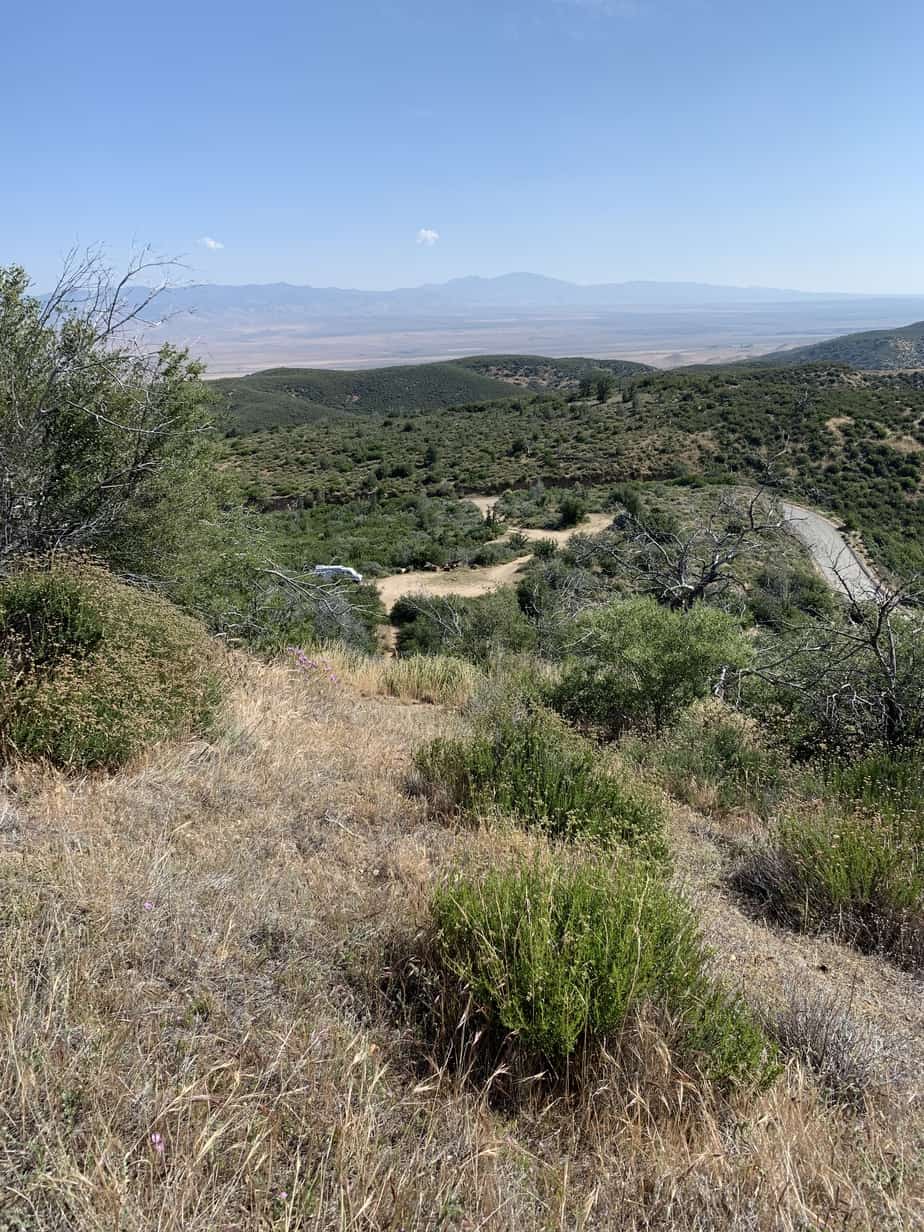 It was a good day! I felt strong. I really liked going at my own pace without feeling my self-imposed pressure to “not slow Steve down”.

It was a little odd to leave the van. I felt some worry about theft or a broken window or something.

I put my hand in the picture for scale but then when I got back to the van I saw how dirty my hands are after two days!

I think it’s mostly because of crawling under the metal roof of a cistern to get water. My legs were so dirty too!

I was taking a baby wipe bath and saw that I got my first tic! It was weird but also a little fun! It didn’t hurt and I’m not positive I got it all out because I didn’t realize what it was at first. We’ll keep an eye on it for a couple days just in case.

Anyway. I hiked 12.8 miles yesterday (with the “detour” at the beginning) and 11.7 back to the van today! Today was much harder on my shoulder than I would have liked. It just plain hurt. I tried not to be a whiner, but it just comes naturally! 😂

Both days, in the afternoon, the thunder started. Yesterday was just a little rain, today quite a bit right after we got to the van. Steve waited it out then started hiking again.

I tried to capture it. Does anyone else hate hearing their own voice on video? I sound like a dang mouse.

It was quite a beautiful portion of the trail and even though it was the normal climbing, it was still a great path and so pretty! I followed a quail down the trail for a while! Today I saw a black rattle snake. It was just like one I saw at Vasquez Rocks’ interpretive center.

I also saw this handsome guy!

My hips reminded me why I don’t like sleeping on the ground, but honestly it felt so wonderful waking up in the tent to the sound of birds & noisy hikers. It was a huge campground and four hikers tented up right next to us. Actually it was a bit frightening last night, as one of them got disoriented when getting water and couldn’t find her way back. The rest of them went to search and were yelling her name for about ten minutes before they heard her! We were so glad she was okay.

I was hoping to meet up with Rosie today to meet her but I haven’t had cell reception.

Can you see Steve at the very top of this greenery in the middle of the picture below? I was hopeful that he was at the top, but when I got there, I realized he wasn’t.

It continues to thunder as I write! I’m enjoying it immensely. Growing up in Louisiana, meant lots of thunder and lightning. Funny how much I’ve missed it and how the sound of it reminds me of childhood.